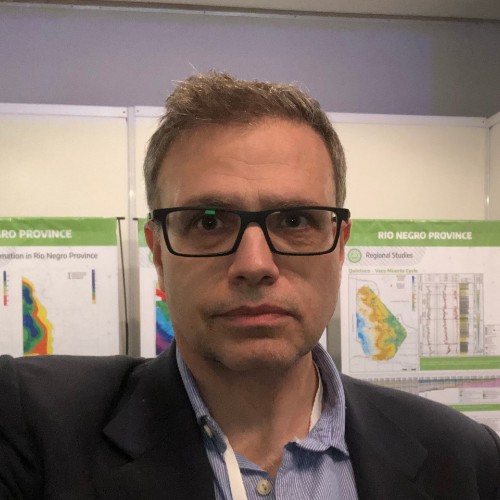 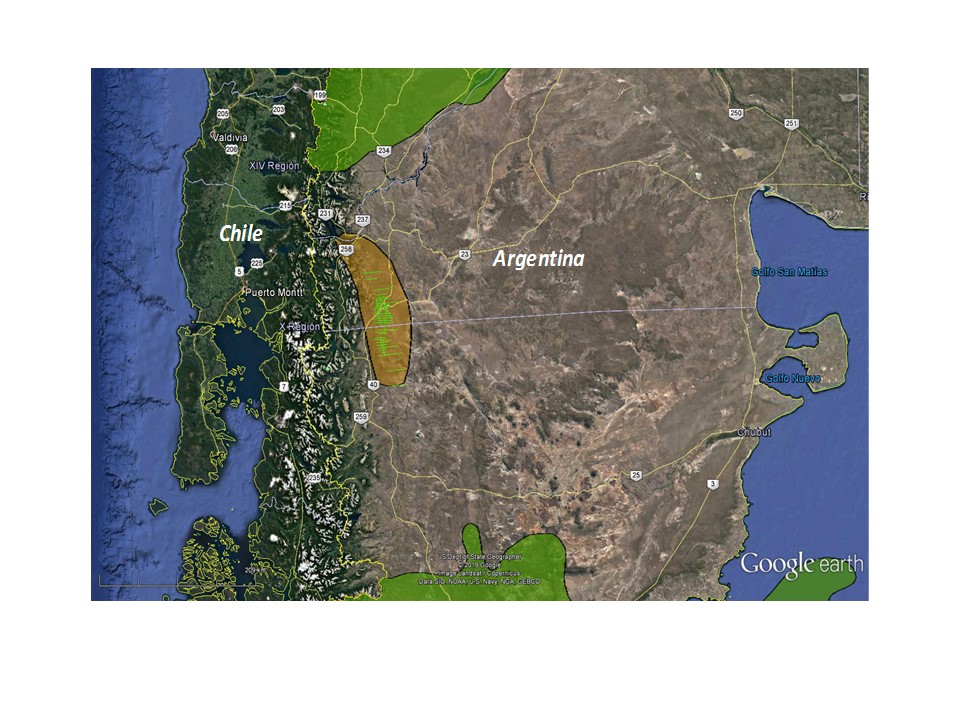 Located in southwestern Argentina, it covers around 15000 Km2, with more than 10.000 ft. thickness in the depocenters. The basin has more than 100 years of exploration history started with the exploitation of 10 barrels a day from 4 wells in “Arroyo de La Mina” oil seepage. This report summarizes the new exploration ideas, based on geochemical data and outcrops description that allows the existence of a hypothetical new petroleum system. This idea generates high exploration potential in undrilled deep sections of big structures.

Located in southwestern Argentina, it covers around 15000 Km2, with more than 10.000 ft. thickness in the depocenters. The basin has more than 100 years of exploration history started with the exploitation of 10 barrels a day from 4 wells in “Arroyo de La Mina” oil seepage. This report summarizes the new exploration ideas, based on geochemical data and outcrops description that allows the existence of a hypothetical new petroleum system. This idea generates high exploration potential is located in undrilled deep sections of big structures.

This extensive report is written in Spanish and is available for purchase and discussion during the consultation with the author. The consultation could be in English or Spanish.

Outline of the report:

The oil and gas exploration in Ñirihuau Basin began in the early 1920's century. In 1915, the “Mina Chilena” Company starts exploiting the “Arroyo de la Mina” oil seep, obtaining 10 barrels per day of oil production from 4 wells and the main seep in 1930. Between 1933 and 1935 YPF(Yacimientos Petrolíferos Fiscales), drilled two exploratory wells, Ñ-1 (2.086 ft) and Ñ-2 (4.895 ft). Both wells detected several hydrocarbons shows while drilling, and detected high gas pressure in an andesitic level of Ventana Formation in Ñ-2 well. At the ends of the 1930's´, CelinaCompany drilled 2 exploratory wells (985 ft. Approximately), with oil and gas production (No data was registered). In the 1980´s, Esso and Pluspetrol companies performed an exploratory program acquired 787 km of 2D seismic (22 lines) and drilled 3 exploratory wells, as a result all well were dry (Fig, 2).

The Ñirihuau Intra Arc Basin, was originated in late Paleocene-Middle Eocene (Cazau et al, 2005), as an extensive basin (Back Arc). With asymmetric shape, is limited by normal faults, whose controls the evolution of volcanic, continental and marine paleo environments, with two main cycles (Cazau et al, 2005). The basal cycle is composed by rhyolitic rocks, followed by andesitic rocks with fluvial- lacunar thin intercalations (Cazau et al, 1989),in a high accommodation system tract. The cycle ends with a marine transgression (Feruglio, 1941), and the development of fluvial deltaic systems, with regressive-transgressive arrange.

The big change in thickness of these units, indicate the presence of intra basin blocks that separates isolated depocenters, controlled by oblique extension during the Rift phase at the beginning of the intra arc stage.

In the Oligocene, the basin was consolidated (Cazau et al, 2005; Bechiset al, 2004) and the migration of the volcanic arc produces volcano-clastic facies intercalated with marine facies (Feruglio, 1941; Cazau, 1972; Cazau et al,  2005).The sedimentation continues with alluvial and lacunar facies in the rifting climax phase, deltaic deposits of early post rift phase (sensu Prosser, 1993), and finally fluvial-lacustrine facies of the late post rift phase are deposited. During the Miocene these deposits were affected by compressive deformation, and over them the Collon Cura formation was deposited. The latter deformation at the south, affected the Collon Cura formation (Syn orogenic deposits, Cazau et al: 2005).

The older exploratory models, considered the volcaniclastic Ventana and Huitrera formations as the economic basement of the basin. The new exploratory model (Bernardo et al, 2009), proposes that in some places of the basin beneath the Ventana Formation, clastic sediments of the initial extensive phase has been preserved (Foyel Group or older sequences, Fig. 3).

This new hypothesis creates high exploratory expectations, based on the fact that of better generation and expulsion conditions for these deeper clastic sequences.

After that, occurs the deposition of Ñirihuau and Collon Cura formations mainly to the east

The hydrocarbon generation potential of lacustrine facies of the Ñirihuau formation (Middle section), at the Northeast and southeast portion of the basin, have good to excellent properties for oil generation, with kerogen type  I / II, and variable TOC and HI values (Fig. 4). Towards the center of the basin, its generation potential reduces and they tend to be gas prone (Bernardo et al, 2009).Although the good to excellent quality as a source rocks, the lacustrine facies of Ñirihuau formation don’t reach the thermal maturity for oil generation (Fig. 4).

The 1 D thermal model performed in some wells, indicates some oil generation in specific portions of the basin, but the expulsion was not extensive (Fig. 5).

The Ñirihuau formation would need around 2800 m (9100 ft) of overburden for generate oil, but according to the seismic interpretation the generation sequences of this Formation wouldn’t reach this depth.

The second source rock of the basin (identified only in outcrops of the northwest part of the basin) is the Rio Foyel formation (Fig. 3, 4 and 5).

According to the gravimetric and seismic data, the depocenters located at the northern and northwestern part of the basin could have thick sequences of the Foyel Group, and would be the best place for oil generation. Two main facies have hydrocarbon generation potential; one is marine and the other is the lacustrine. The first one has low TOC and organic matter type III, with gas prone potential.

The lacustrine facies with TOC from 1 to 10 % and organic matter type II/III, has a very good generation potential.

The geochemical chart of the Arroyo de la Mina oil seepage (Fig.7), indicates lacustrine origin, with a Ro 0.6 to 0.7, and biodegradation. Biomarkers indicate the lack of correlation between the Ñirihuau facies with oil from the seepage and the wells, so this could be attributed to the mixing with other oil with higher maturity.The isotopic analysis from the well gas in the “Las Golondrinas” location, corresponds a wet gas associated with condensate fluid, generated in maturity conditions of approximately Ro 1.2.

These result sallow the strong hypothesis of the coexisting of two petroleum systems (Fig. 8):

The classical reservoir recognized in the basin is the Ñirihuau formation (lower section). Based on the outcrops studies, is composed by prograding barrier beach and lacustrine shoreline sandstones with 22 % average porosity and 2000 ft. thickness (Fig 3).Hypothetical coastal sandstones from upper Foyel formation could be considered as an excellent reservoir (Fig. 3).

The new exploration model, can explain the lack of success in the 5 wells drilled in the basin.Is expected, according with the last geochemical data, the existence of another petroleum system (Foyel-Foyel(!)) beneath the volcanic rocks of Ventana Fm. (Seal?), with a high exploration potential. Another problem could be the timing of hydrocarbon generation and the trap formation (20 m.y earlier?) An example of that is the Ñorquinco Prospect, where the exploration well didn’t reach the Foyel Group in a 3 way closure against inverted fault trap (Fig. 9). So the challenge would be drill the volcanic section to explore the Foyel-Foyel petroleum system.